What IMU can do…. 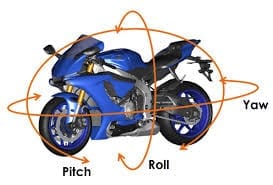 Do you think of how much this little box can do to keep your bike on the edge? Or do you have an idea of the complex model necessary to process all phisics motorcycle info and extract the relevant actions? Not that long ago, the idea of a bike with workable traction control was pretty much unthinkable. Even well into the 21st century, when launch control, traction control and cornering stability control systems were becoming well established in even fairly mundane cars, most motorcycle manufacturers weren’t keen on the idea of electronic interference. But today, just a few years later, traction control and ABS are spreading fast, filtering down from the superbikes that debuted the systems less than a decade ago to mainstream models. It is all due to the IMU and many calculations. But Internally how it works? Accelerometers work using weights suspended on springs, called ‘seismic masses’ – one for each direction (left-right, forwards-backwards and up-down in a three-axis accelerometer). Because the weight is known, as is the rate of the spring, by measuring how far that weight moves away from its static position the sensor can tell how fast the unit is accelerating in a particular direction.

As a bike leans over and rolls on to the edge of its tyres, the effective diameters of its front and rear wheels both become smaller, and because they usually have different widths and profiles, they don’t do it in unison. That, in turn, means they will rotate at different speeds, screwing up simple comparative formulas for applying traction control or ABS. Look difficult? No. Not just lean-sensitive traction control and ABS, but technologies like wheelie control and rear-wheel lift control suddenly become possible to implement, along with all the levels of rider-adaptable adjustment that we’re coming to expect. But all this stuff need to receive accurated info. So how it start from the beginning? In general, IMU mounting affects measures quality andoverall precision. It is advised to design and verify it carefully.The IMU require to be Zeroed and this procedure need to be done accurately.

The motorcyle need to be placed on a KNOWN surface that have previousy ZEROED on A direction and B direction following the previous image. This procedure MUST be done using an ACCURATE inclinometer. Then the motorcycle need to be kept PERPENDICULAR to the bench surface, tyre touching the surface. Int his condition the IMU can be zeroed.

The motorcycle deggree of freedom allows it to rotate around front and rear tyre contact patch, and the ddep analysys of the movement involve many paramenter. The IMU allows the Engineer to have a very detailed info about them. The IMUs on motorcycles, whether five-axis or six-axis, hand all their information about the bike’s acceleration and rotation to computers that use it for the ABS and traction control – and, in some case, for electronic suspension adjustment, too.

The IMU is often integrated into the ECU system and comes as a single closed loop control system. Electronic rider aids require data acquisition in real time at rapid buffer rates, in order to provide a seamless control to the riders. The IMU plays a major role in data acquisition as it can communicate the exact lean angle, rate of acceleration and position of the motorcycle in every possible circumstance. This data is then fetched by the ECU and is used to carry complex calculations for each system. For example, the vertical acceleration and pitch angle data is used to detect a possible power wheelie during acceleration, and further cuts down the engine power to bring the front wheel down.

Considering the above point the importance of a good IMU appear obvious.

Motorsport Engineering is a exclusive distributor of a E Lean sensor, an advanced 6 DOF imu. It was tested under many motorbikes and very hi demanding conditions. 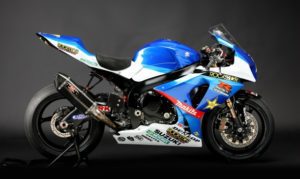 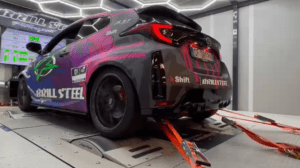 This a great build that include sequential gearbox, paddleshift, flexfuel, ALS, fresh air and more. This is the numbers…. 572Hp and 647 Nm. Thanks to our fantastic partner: Brillsteel, Zod Racing, MoTeC. The car is controlled by the MoTeC M142 ecu that runs a custom package. For any request you 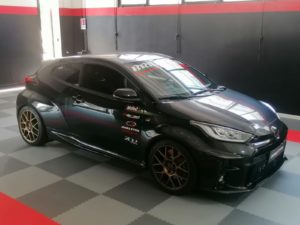 Motorsport Engineering can offer a very nice package for the latest Toyota Yaris GR. It is a full integration package that include all the vehicle features as standard. It is also a racing package with traction control, lanch control, antilag, boost control etc. This stage 1 is great and perform

Sign up to receive news and offers and promotions

Remember if you do not consent Event,Product, Offers we can’t send you offer and promotional email or event email.

After registering you will receive an email to confirm your email address and verify your identity.